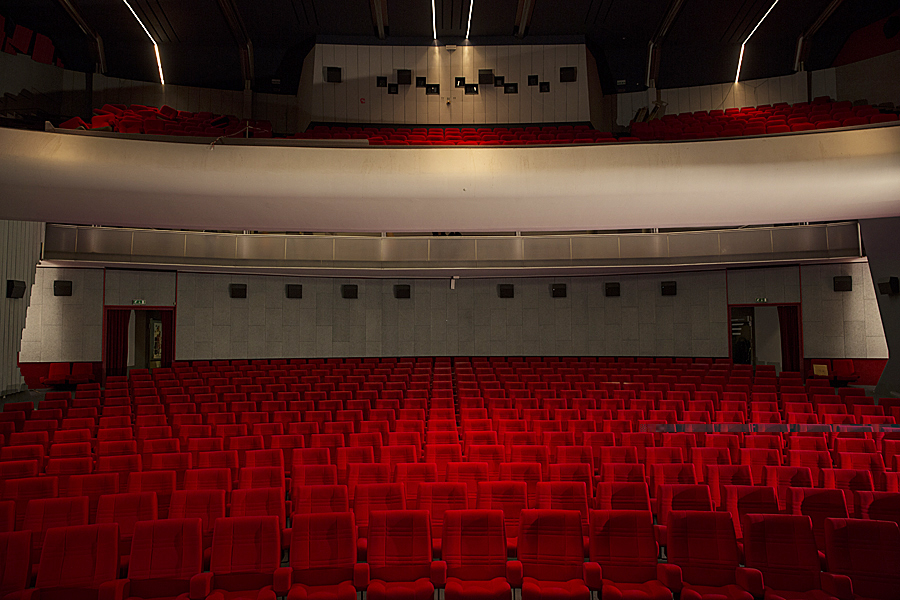 “A film is not made for you to promenade your eyes, but for you to enter it and become entirely absorbed by it.” Robert Bresson

“It is according to rule that the architecture of a building should be adapted to its purpose in such a manner that this purpose shall be immediately apparent from the mere aspect of the building.” Victor Hugo, The Hunchback of Notre-Dame

The Plaza cinema in Geneva was inaugurated and opened to the public in November 1952. From the outset, the event was of historic significance. A masterpiece of modern architecture designed by Marc-Joseph Saugey, the Plaza was then, with its 1,250 seats, the largest cinema in Geneva. Its huge screen, designed by Saugey like a theatre stage, with a golden wooden frame and curtains, inaugurated the new CinemaScope projection technique in Switzerland.

Rarely have architecture and cinema been so contemporary and benefitted from such a convergence between space design and moving images, exalting Hollywood and European cinema as a modern spectacle par excellence, both solitary through the captivating power of the screen, and collective, since it is shared by a packed audience.

The Plaza cinema was indeed, from its inception, an emblem of the post-war years, those “thirty glorious years” whose spirit, rhythm and aspirations it crystallised. Doctor Zhivago directed by David Lean brought together a record 120,000+ cinemagoers there from 1965 onwards. 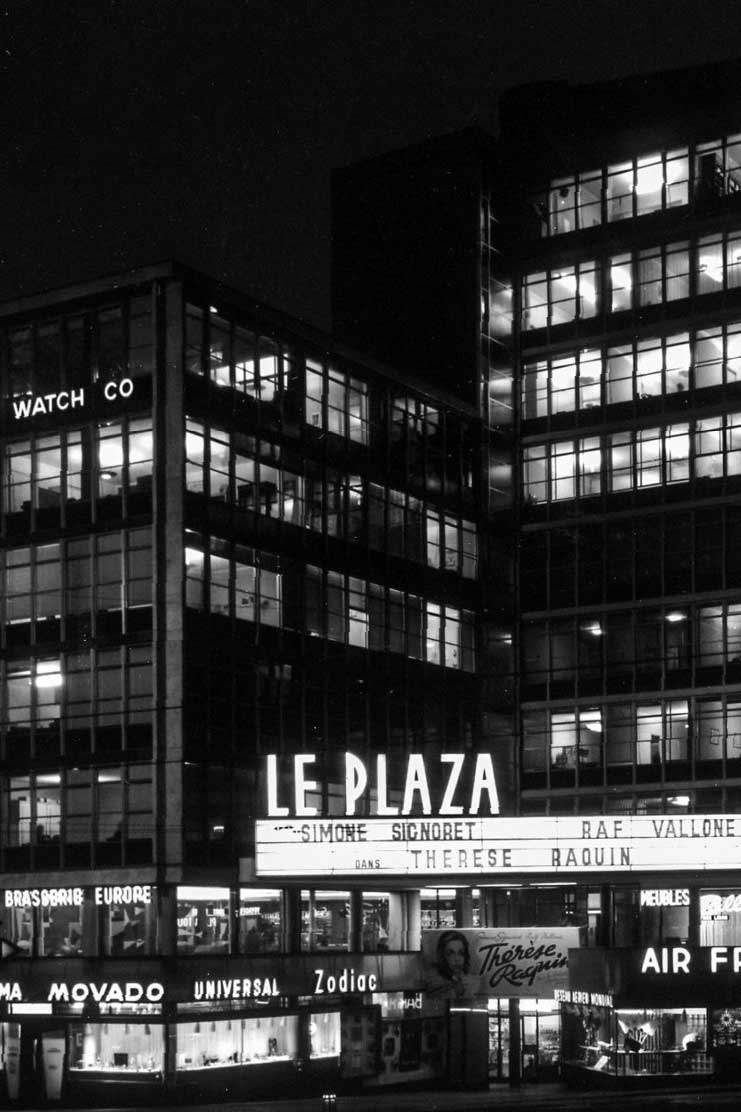 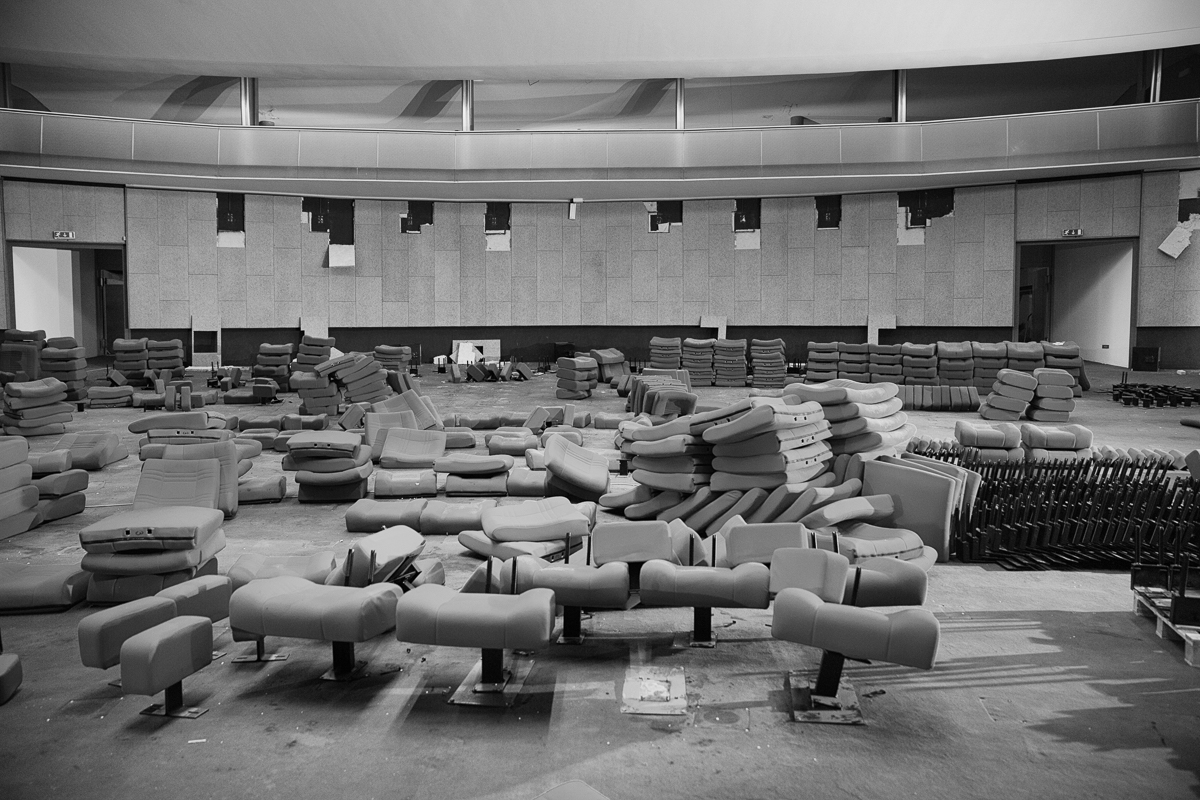 However, after two decades of decline, the Plaza closed its doors on 31 January 2004, permanently, it seemed. This was followed by years of hesitation and uncertainty, of legal procedures and programmed destruction, of passionate and determined mobilisation work, carried out in solidarity above all by cinema lovers, the cultural community and defenders of architectural heritage, led by architects and historians, aware of the exceptional quality and absolute rarity of the Plaza cinema. Thus, university teacher Bruno Reichlin wrote:

The summer of 2019 marked the end of this drawn-out agony and the epilogue of this civic struggle with a spectacular turn of events. Just as demolition and construction permits had “entered into force” and many were resigned to this ransacking, the Plaza was saved in extremis with the purchase of the whole Mont-Blanc Centre de Saugey facility by the Hans Wilsdorf Foundation. The Plaza Foundation was created straight afterwards with the sole mission of imagining and leading the resurgence of the eponymous venue. Enjoying a leasehold estate over the entire Mont-Blanc Centre, the Plaza Foundation was free to use the means of an unexpected ambition: to renovate the cinema, as well as most of the adjacent spaces, to develop the original project of a Cultural Centre for Architecture and Cinema.

What remains is the actual revival of the Plaza which, in accordance with its original vocation, will be twofold, combining a cultural project whose central axis remains cinema – envisaged in its contemporary technological, social and aesthetic realities – with the architectural project of an exemplary restoration.

The Board of the Plaza Foundation has therefore decided to launch an architectural competition, by invitation, for the restructuring and renovation of the cinema, as well as a brasserie and a large complex of adjacent premises and arcades, which will restore the logic of interaction between the cinema and the public space promoted by Saugey. Responsibility for the administration of this competition has been entrusted to Jacques Roulet, architect and member of the Board of the Foundation. The Plaza Foundation will be assisted by a Scientific Council, grouping together architects, heritage specialists and film professionals. We will work in conjunction with government services. The Foundation’s Board has selected and invited 15 firms, from Geneva, the rest of Switzerland and France, handpicked not only for their inventiveness and sensitivity to 1950s and 1960s architecture, but also for their experience in the restoration of modern heritage. The aim of the competition is to bring together the talent and skills of these firms to restore Saugey’s masterpiece in its original spirit and vocation, while meeting the requirements of a programme that views the cinema and its surroundings from a resolutely contemporary perspective.

The Cultural Centre for Architecture and Cinema pursues one ambition: to contribute to inventing a new future for cinema in Geneva, for Geneva, based on the renewal of an illustrious space, deeply rooted in the city’s memory. Its exceptional architecture, its history, its location in one of the city’s hotspots will make it a lively hub, capable of reactivating the event of cinema, at the heart of a large ecosystem with which it will be in permanent interaction. It is indeed the work of Marc-Joseph Saugey, restored in its entirety, that will carry the ambition of a venue capable of meeting the expectations of cinema expressed by poet Robert Desnos, almost a century ago: 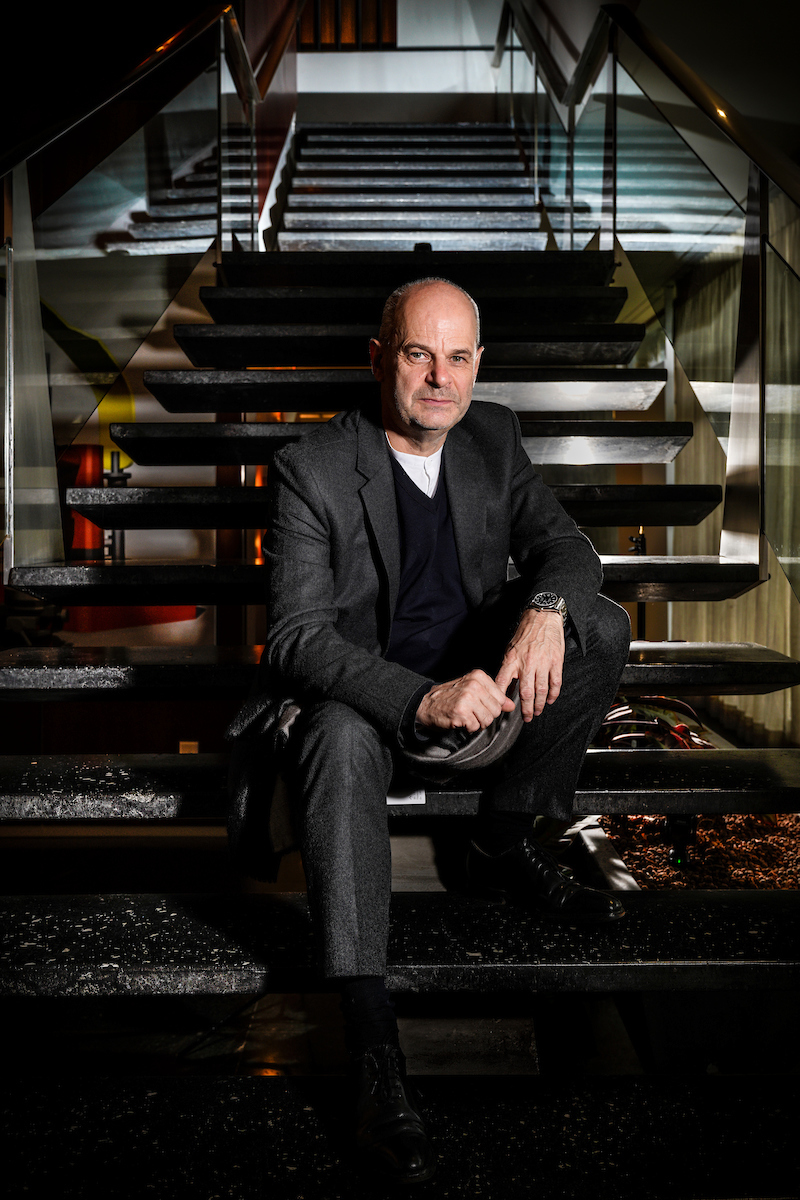