Le Plaza is now a listed building, recognised as the 279th building of exceptional value of Geneva’s built heritage, one of the few dating from the 20th century that now benefits from the highest protection measures in Geneva.
To carry out the renovation and redevelopment of the cinema and all the adjacent spaces included in the programme for the creation of the new Plaza – Cultural Centre for Architecture and Cinema, the Plaza Foundation launched a competition to select a multidisciplinary group of contractors. 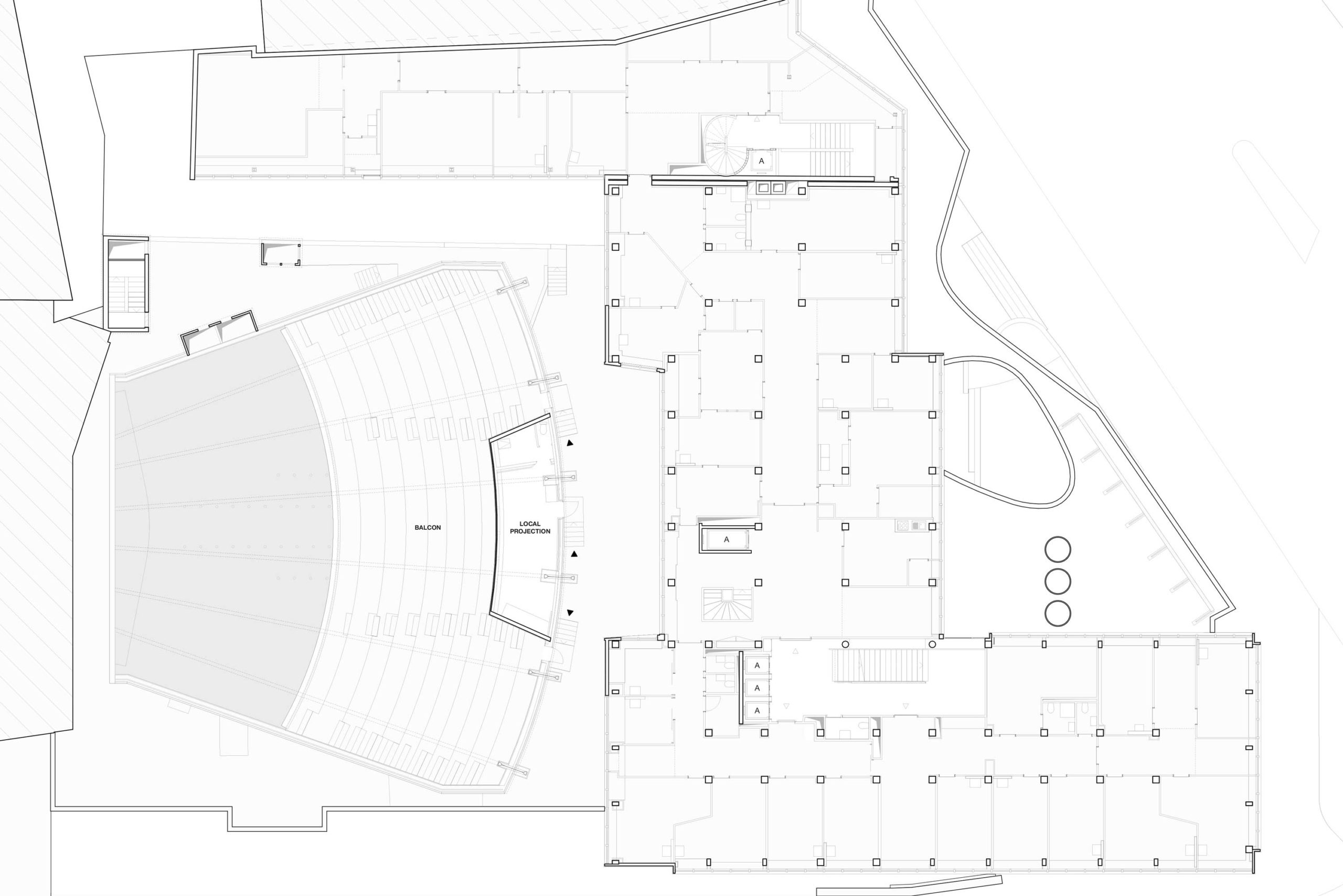 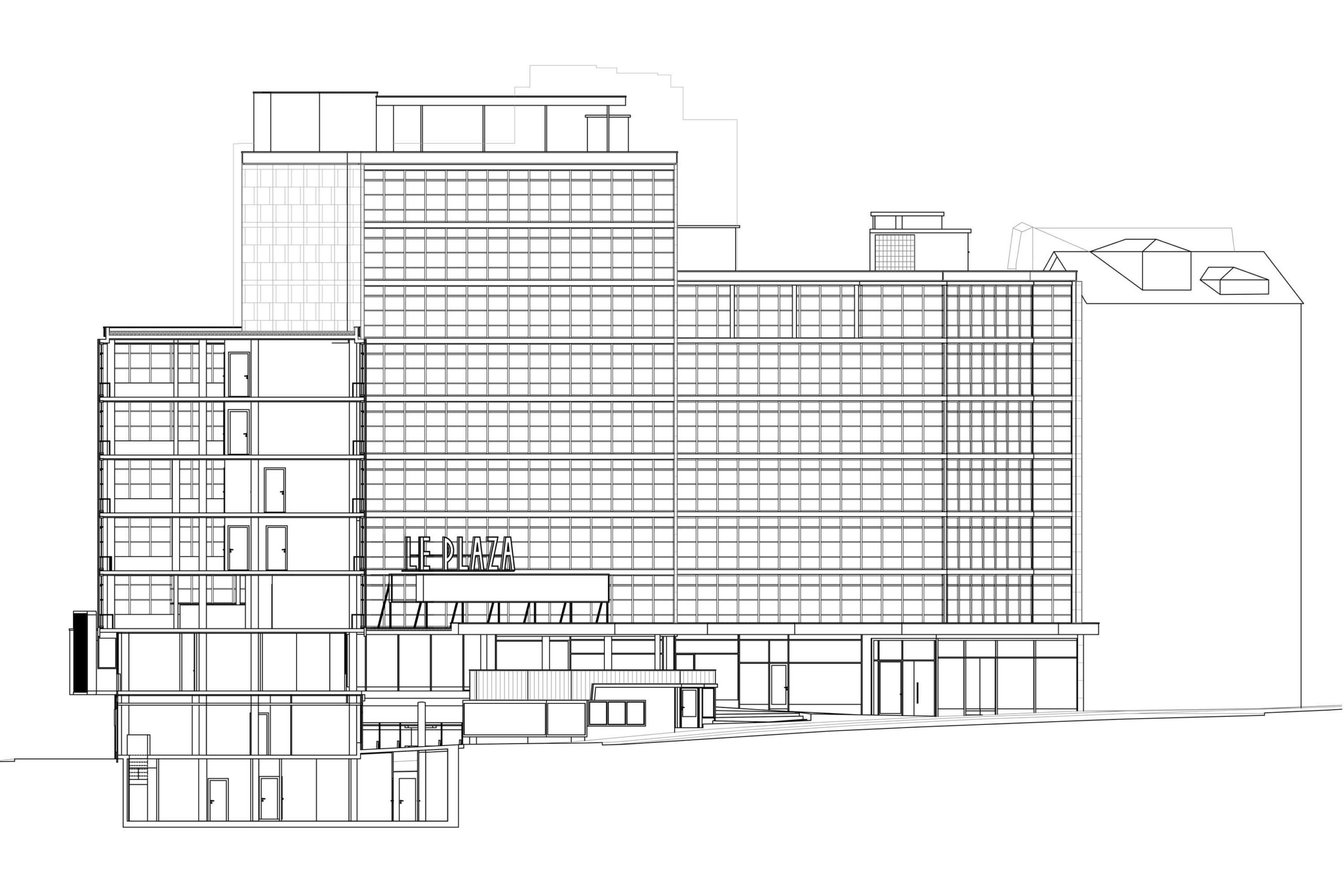 Fourteen teams, from Geneva, the rest of Switzerland and France were chosen to participate in the first phase of this competition. Their selection was confidential. After three days of passionate deliberation and evaluation (15-17 March), the seven members of the jury, assisted by six expert offices – one of which is a specialist in cinema design – selected three projects for phase 2 of the competition. These three teams were selected to continue parallel study mandates in phase 2. The winning team will be announced on 3 September.

The rebirth of the Plaza is now underway. In the last few months, this legendary venue on Geneva’s right bank has begun to live again. The city is already buzzing with rumours. We know that architects, who are still anonymous, are already at work. The press, both general and cultural, has reported on the project, from Geneva to Zurich.

SRF in Eastern Switzerland has for example mentioned the “planned renovation of Le Plaza in Geneva”, adding that “Le Plaza, which was bought by the Hans Wilsdorf Foundation, is to be transformed into a luxury hall with up to 1000 seats and thus become a kind of Art Bayreuth Museum for cinema festivals”.

The figures are a little fanciful, but the ambition and the dreams behind the Plaza are well established. This public expectation and the exceptional potential of the site obliges all the actors in the project: the project owner and managers, those responsible for the Plaza cultural project and the architects of this first and decisive rebirth of the Plaza as an architectural object of major heritage interest.

These challenges and responsibilities were visible in the twelve projects that were submitted to the Foundation during phase 1 of the competition. 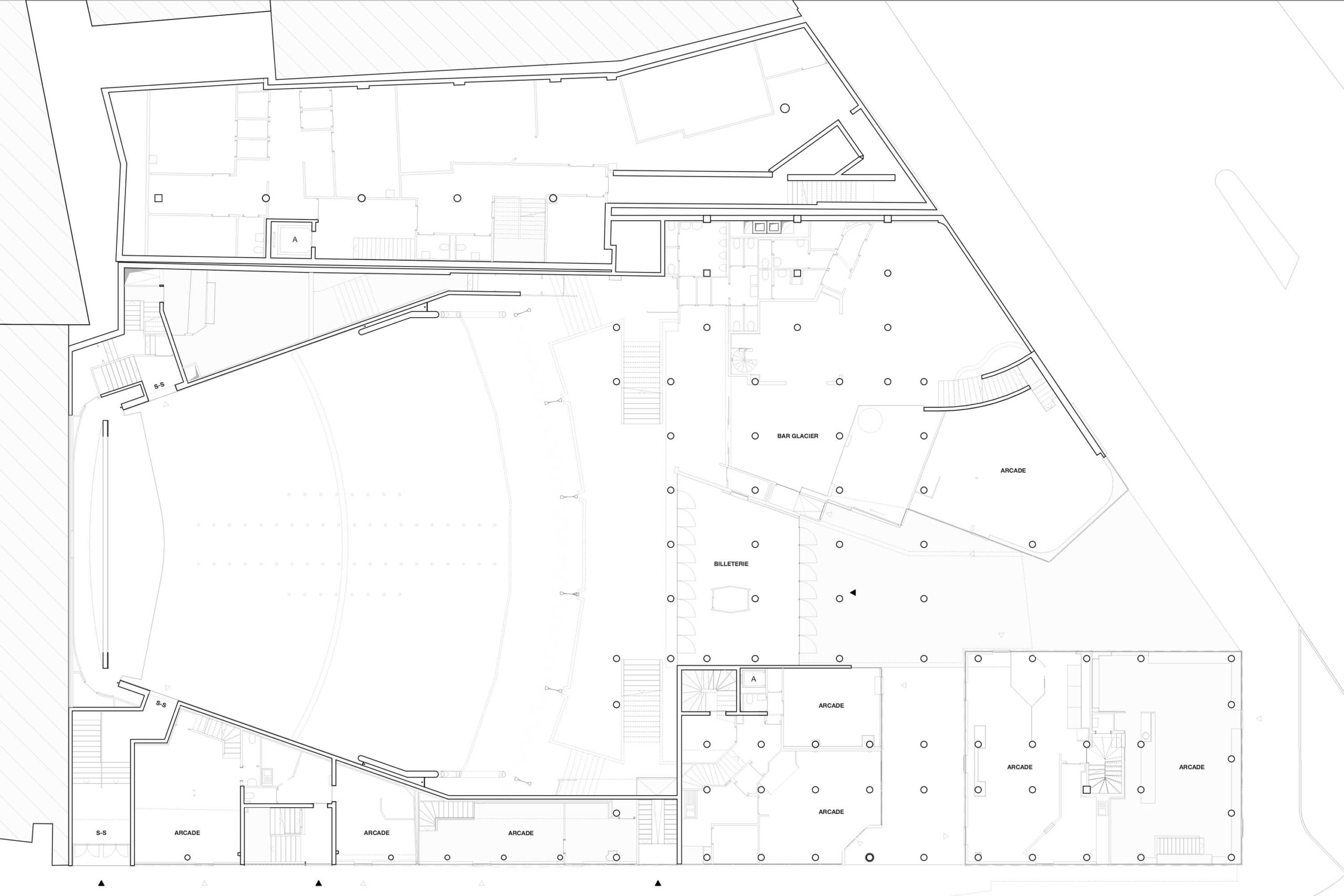 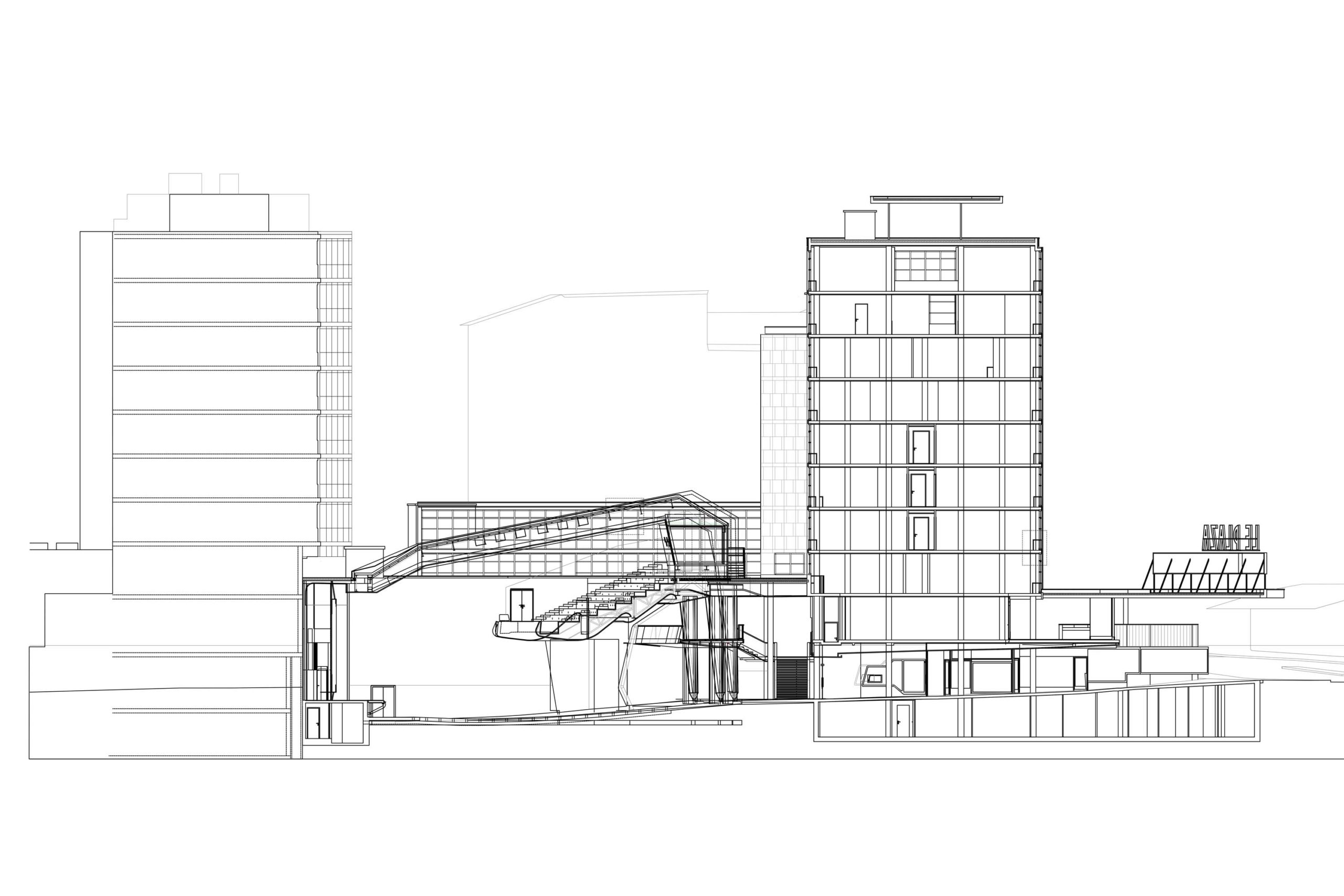 Some notable architectural features:
One of the unique features of Le Plaza, both technically and aesthetically, is the structure of its dark room. The latter is topped by six large aluminium trusses, each forty metres long, which form the visible framework of the cinema. These supporting structures, which are deliberately left visible, form a strong aesthetic element that highlights a pioneering technical feat in Switzerland and across Europe.

The hall includes an imposing balcony and a gallery at mid-height at the back. The latter also reveals a technical performance achieved with the complicity of engineer Pierre Froidevaux, with a 20-metre span supported solely by two lateral concrete supports on either side of the hall. The result is a large volume without any visual obstruction. During screenings, a large red curtain used to obscure the large auditorium at the back, which would otherwise almost be immediately connected to the street, and more specifically to the covered passage linking Rue Chantepoulet to Rue du Cendrier, which features a gallery lined with commercial arcades.

Born near Geneva in 1908, Marc J. Saugey is a leading figure in Geneva’s architecture and urban planning who produced some of Geneva’s most brilliant architectural work in the post-war years. After studying at the Technicum, he became a member of GANG, the Groupe pour l’Architecture Nouvelle à Genève, in 1931 and opened his own architectural office in 1941. With Alberto Sartoris and Anthony Krafft, he founded the journal Architecture, Formes + Fonctions in 1956. He also taught at the School of Architecture of the University of Geneva.

Saugey designed most of his buildings in the heart of Geneva. The passages, window displays and ramps emblematic of his work, which can also be found in the Mont-Blanc Centre where Le Plaza is located, have left their mark on the urban landscape and the daily lives of users in the centre of Geneva. Inspired by American architecture, Saugey’s multifunctional complexes are often recognisable by their curtain walls. Saugey also designed a number of residential complexes, including the Hôtel du Rhône on Quai Turretini in 1950, one of the most modern of its time, and the Tour de Rive, a lookout building on the edge of the Old Town, where he occupied the top floors for his home and office. He died in Geneva in January 1971. 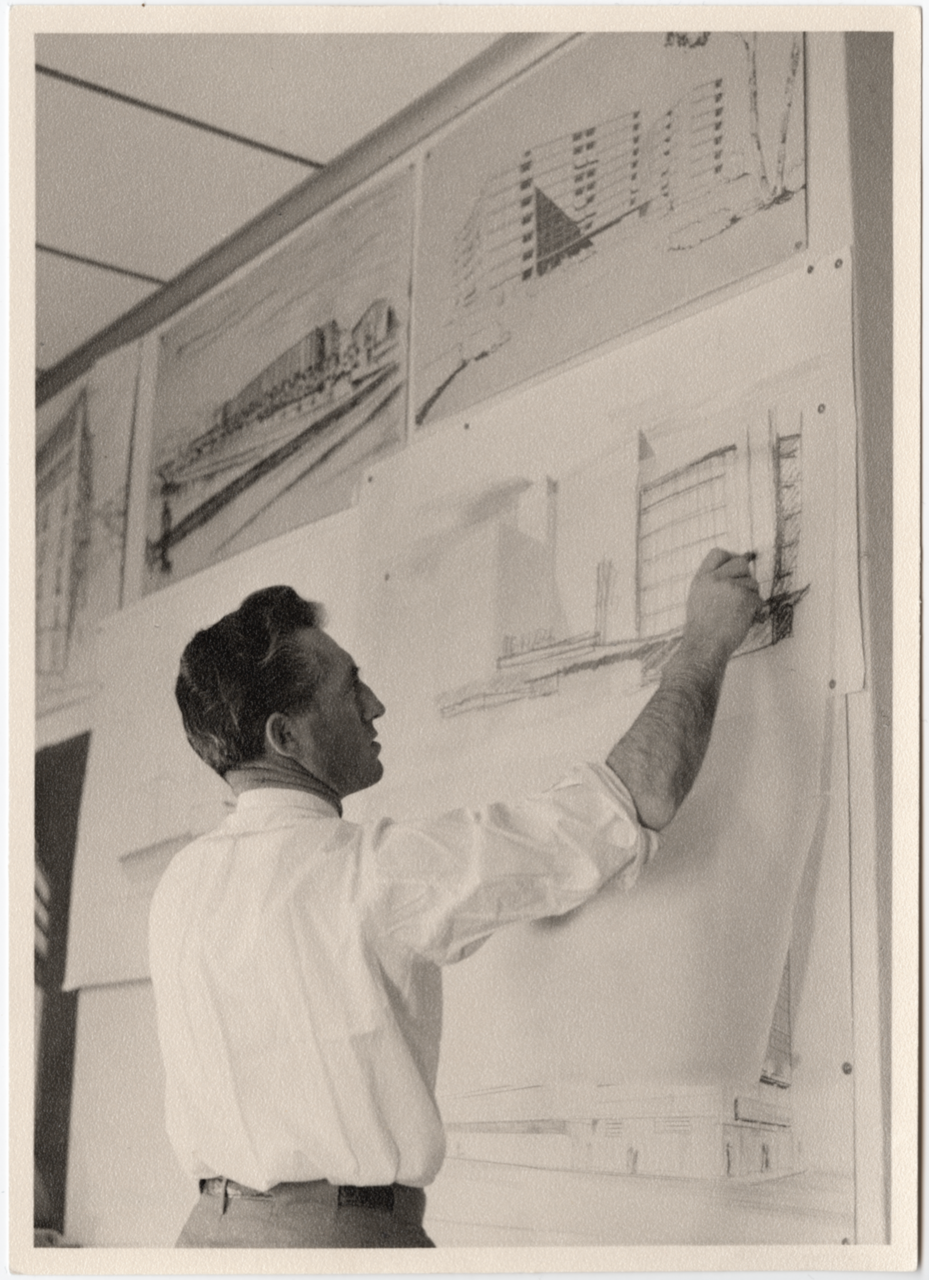 Marc J. Saugey drawing a sketch of the front of Mont-Blanc-Centre, around 1951 (photo Franz Villiger)